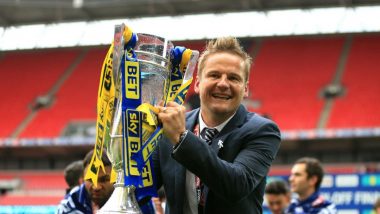 With a promotion already on his CV at AFC Wimbledon, Neal Ardley will be hoping for a repeat performance at the Moors.

INCOMING manager Neal Ardley admits the opportunity to add to the growing narrative at Solihull Moors played a big role in attracting him to the SportNation.bet Stadium.

Formerly of AFC Wimbledon and more recently at Notts County, the 48-year-old will formally take charge of the club on July 1 after penning terms with the Moors, and will be tasked with leading Solihull to a National League promotion challenge in the 2021/22 season.

Turning out for Wimbledon and Watford for the majority of his playing career, Ardley returned to the Dons as manager in 2012 and notably achieved promotion from League Two via the play-offs in the 2015/16 season.

After six years with AFC, he made the move to Meadow Lane for a three-year spell, departing in March with the Magpies in the play-off places after the club fell away from eventual champions Sutton United.

And having waited patiently for his next managerial role, the new Moors boss says the ambition of the Warwickshire club perfectly met his own aspirations.

“After leaving Notts County I was hoping my next job could be a project that would give me the chance to take a club forward,” said Ardley.

“From day one, after meeting Darryl (Eales), Tim (Murphy) and Craig (Cope), it was clear that there’s a huge ambition to go alongside the wonderful story of Solihull Moors.

“I hope to add to the great work that’s been put in place and keep the club moving forward – on and off the pitch.

“I’m really looking forward to starting with the players after their strong finish to last season, and working closely with James Quinn and all the staff at the club.”

The aforementioned Quinn, a coach under previous managers Mark Yates, Jimmy Shan and Tim Flowers, has been promoted to assistant manager, whilst Ardley’s former number two at County Greg Abbott is set to become a consultant for the club – assisting in the areas of player recruitment and match preparation.

From the point of view of the Moors Chairman Darryl Eales, making the move for Ardley has been a long time in the making.

“I first met Neal when he was at AFC Wimbledon, and I was Chairman of Oxford United, I would have liked to have appointed him as Oxford manager when Michael Appleton left to join Leicester City,” he said.

“At that time, I deemed it inappropriate to approach a manager at another club, so it was serendipity when Notts County released Neal – I am absolutely delighted that we have persuaded Neal to join the Moors project.

“I’m also delighted that Quinny will play a more central role in the coaching team and that we have secured the experience and know-how of Greg Abbott to assist our push for promotion next season.”