Ambition of Moors matched by Pearce upon Solihull move 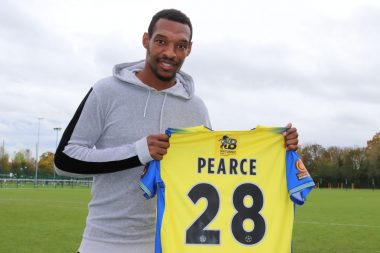 Krystian Pearce will wear the number 28 shirt during his time at the Moors.

NEW RECRUIT Krystian Pearce says his full focus is on playing a part in a potential promotion push upon signing for Solihull Moors.

The 30-year-old defender, formerly of Birmingham City, signed a short-term contract with the club a day before Moors’ 3-1 defeat at Maidenhead United on Saturday – a match in which he started – having previously been a free agent.

Two-cap Barbados international Pearce most notably captained Mansfield Town, amassing 217 appearances and 16 goals for the League Two club in all, before being released at the end of the 2019/20 season.

With a footballing CV that includes further stints in the Football League for Notts County, Huddersfield Town and Scunthorpe United, Pearce says it is his aim to help give his all to help Solihull break out of the top tier of the non-league ladder.

“It’s a good set-up here, Moors are an ambitious club trying to get into the league, so it suited me down to a tee,” he said.

“I’ve been in the game a long time now and captained Mansfield for the last three, four years, so I just want to bring my quality and experience to the team.

“I’m a local boy so it just fits hand in hand really. Like I said, it’s an ambitious club and I’m an ambitious person so hopefully we can get into the league.”

The central defender is a player well-known to manager Jimmy Shan, having worked together in Birmingham’s academy.

While Pearce did not quite make the grade to break through at Blues during on first acquintance, Shan says his new signing can provide plenty of valuable attributes to his side.

“For the short-term period, it gives us someone with vast experience. He’s a natural born leader and he adds to that quality,” added the Moors boss.

“I’ve been an admirer of Krystian for a number of years. He’s strong, competitive, very athletic and he can handle the ball.”