FOOTBALL: A GOAL in either half by Akwasi Asante helped Solihull Moors make a welcome return to winning ways in the National League at home to North Ferriby United, reports John Clothier.

Both sides were promoted from the National League North last season and the visitors headed into Saturday’s match having gone on an unbeaten run in November, but Asante’s brace was the difference as Liam McDonald registered his first league win as Moors manager.

McDonald handed home debuts to recent signings Curtis Obeng and George Carline but it was North Ferriby who made a positive start with Sutton’s dangerous cross causing panic in the Moors box.

Joel Dielna shot straight at Watson from 20 yards out before Liam Daly, back from a one-match suspension, headed down for Asante but Watson was well placed to quell the danger.

The Villagers then had the best chance of the match so far when Emerton dispossessed Dielna on the edge of the box and pulled to ball back for the incoming Wootton who shot wide with the goal at his mercy.

Osborne was menacing in midfield and having zipped passed two defenders his pin point cross to Asante was thumped wide of the mark but on 31 minutes the big striker soon made amends when Walker could not hold Osborne’s powerful low drive and he pounced to put Moors ahead from close range. 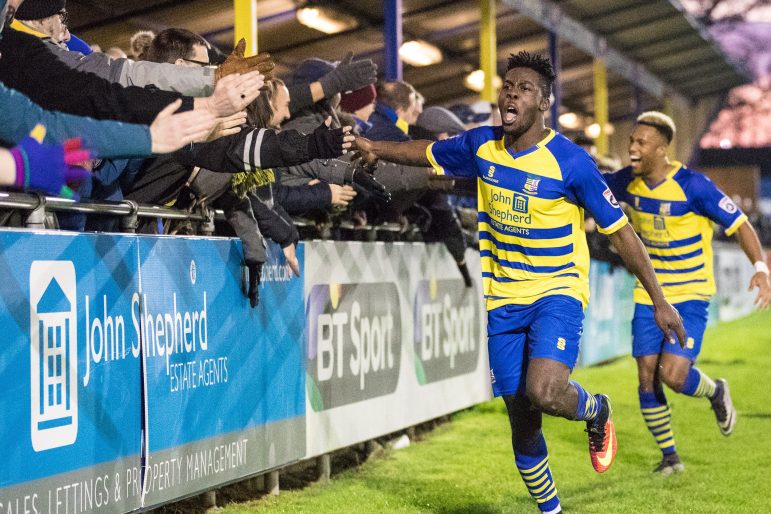 Asante almost turned provider when he dribbled his way into space down the left before crossing for Shep Murombedzi but his header was straight at Watson, while at the other end Danny Lewis was ready for Brogan’s accurate free kick with two minutes of the half remaining.

Ferriby were quickly out of the blocks as the second half began and Wooten’s thunderbolt looked goal bound before Lewis reacted brilliantly to save.

Moors were straight back as Asante found himself in space some 15 yards out but his shot looped up over Watson before hitting the cross bar and away to safety.

Lewis seemed in two minds coming late for Emerton’s effort on 55 minutes but the ball trickled beyond the far post and almost immediately substitute Bateson shot into the side netting.

Osborne was clattered to the ground but his free kick was well held by Watson whilst at the other end it took a diving save by Lewis at the feet of Kendall as he advanced on goal.

On 76 minutes Moors effectively put the match to bed. Murombedzi crossed to Asante just inside the box and Moors centre forward without any back lift whatsoever smashed the ball in off the underside of the bar.

Carline, who had an impressive first outing, drove a low shot in from the left and it took Watson two attempts to grab the ball as Obeng rushed in.

Moors looked comfortable as the final whistle approached with the very last action coming from Dielna who blasted wide from 25 yards.