SOLIHULL Moors have revealed their new club crest as the club look to transition into a new era.

Working alongside Solihull-based company CM Brand, the process of developing the crest started with the aim of achieving a clean and modern crest that is instantly recognisable and practical to use.

The club felt the time was right to evolve and transition into a new era having developed a ‘brand style’ that is visible and recognisable across all of its channels.

Moors feel the new contemporary design reflects the progressive approach being taken across the entire club and will be used across all club branding with immediate effect.

And the change sees the Griffin become front and centre of the crest, which will appear on the home and away kits of Moors, as well as training and leisurewear and merchandise.

The new crest replaces Moors original badge that has been used since 2007 when Solihull Borough and Moor Green merged to form Solihull Moors. 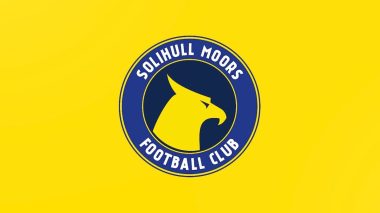 Solihull Moors’ original badge that had been used since the club formed in 2007.

Solihull revealed their brand refresh process with a review of the crest undertaken with the aim of modernising it and creating more of a contemporary design.

The club feels the new crest will work across all channels and become instantly recognisable – something that the current mark struggles to achieve at smaller sizes.

And Moors also listed the requirements the new badge needed to meet as they strived to create a clean, contemporary and modern design which will help to grow the club’s profile in an ever-evolving digital and social media landscape.

To ensure the crest demonstrates a strong and proud link with the Borough and is clearly discernible with Solihull, the club lifted the Griffin’s head from the Solihull Coat of Arms to form the new crest.

The Griffin is taken from the arms of the Finch family, Earls of Aylesford, who have held the lordships of the manors of Bickenhill and Meriden.

In heraldry, the Griffin’s amalgamation of lion and eagle gains in courage and boldness.

The Griffin is used to denote strength, military, courage, and leadership.