A QUALIFIED nurse who was in the RAF for 19 years has been reflecting on finding his dream job at a Solihull veterans care home ahead of Armed Forces Day.

Jamie Stubbs worked for the NHS before joining the RAF in 1995, where he became a Flight Lieutenant Nurse.

He is now the home manager at the Royal Star and Garter, which he first set foot in on Christmas Eve shortly after his interim appointment.

He recalled a meeting with Kevin, the homes driver who is part of their well-being team.

Kevin settled Jamie’s nerves by talking about his biography that was sent to the home prior to Jamie’s arrival.

When he had a minute to first soak up the energy of the home, Jamie noticed the military paintings on the wall.

He said: “The paintings took me and my thoughts away to familiar places and spaces.

“I served in the RAF for 19 years, and the paintings made me feel comfortable, almost like I had visited before.” 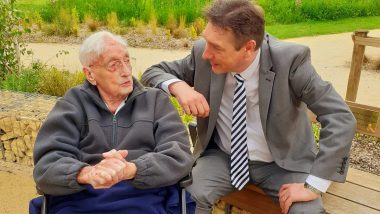 “When I met lead nurse Heni, it became clear that we both held very similar views on what person-centred care should look like.

“She spoke with passion about the Home, the residents, the team and the charity. It was infectious – I had felt this energy from the minute I walked into the Home.”

He also remembered being impressed and grateful that Yuriy and Nadine, the other two lead nurses, came in on their days off to introduce themselves.

“I had never been surrounded by such positivity in this setting before.

“What was intended to be a quick 45-minute ‘dip-my-toe-in-the-water’ visit turned into four-hours.”

Jamie was appointed permanent home manager three months into his interim contract, and he said he said he ‘couldn’t be happier’ as the home has made a huge impression on him.

“I became a nurse because I care about people and I wanted to make a difference.

“I’m in the company of people that have similar military experiences, and it’s an honour to look after them.

“And I think the residents appreciate the bond we share too as we can have conversations about military life and what we’ve been up to, we speak about the bits and pieces we have done.”

“The first six months have been a thrilling and joyous experience, to be in the company of people who are always striving to do what’s best for our residents is a joy.”